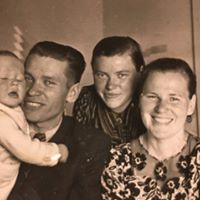 ​FRIENDS & FAMILY
We have added this section to give voice to any of our friends, family or followers who would like to tell their story or comment.
8/27/18  DAINA BRADDOCK

"My parents came to Australia from Latvia, via Germany, Austria and Italy. The sea journey from Naples was quite rough and accommodation in the decommissioned American troop carrier, the Wooster Victory, was very basic.
They made landfall at Port Adelaide,in South Australia in November 1949, and were transported from the docks by rail to Woodside in the Adelaide Hills. Woodside was a WW2 Army Camp which, initially, had very few adjustments for accommodating families.
After a few years at Woodside, they made their home permanent home in Adelaide, but always longed for their real home... Latvia."

"My 88 year old mother, Herta Kikuts (now Hansen), left Jekabpils, Latvia with the rest of her family in the middle of the night via train that picked them up in the forest when she was about 12 yrs. old. We think it was possibly the summer of 1939 or 1940. Mom doesn't remember exact date anymore. The family was split up as my grandfather was conscripted by the Nazis to work on the railroad. My grandmother & her children traveled on and spent years in different DP camps in Germany before my grandfather finally found them in a camp after the war and they were reunited. They came to the US in 1949. There was no question that they would not return to Latvia as my grandfather had been in the military and knew that it would be certain death to return. My mother was a leader of the Girl Guides in the Erlangen DP camp. She presented flowers to General Eisenhower when he visited the camp. I am wondering if anyone has seen a photo of this during your documentation searches. She knows that there were photos taken at the time. I would really like to find a copy of this photo before my mother passes, as she doesn't have many years left. She was a kindergarten teacher, a nursing student, danced in a DP camp Latvian dance troupe, and was a Girl Guide leader. She has never given us all the details of her life on the run from when they left Latvia until they reached the DP camps, nor much about her life in the camps. We do know that she saw horrible things in the forests and was also injured by shrapnel to her head in a refugee train bombing incident. The train was bombed because it also had Nazi war equipment on some cars. A lady threw herself over my mother to protect her and was killed. I have tried to get my mother to talk about these things my whole life but she has always been very tight-lipped. Definitely has PTSD from her experiences. She has many photos from life in the camps that I put into an album for her a few years ago. I would appreciate it if anyone has a lead on where I could find a copy of the Eisenhower photo. Thank you. Shirley Hansen Coon."  If anyone has any information, please contact us.

"My mother's family Kriksciunas received a medal for saving Jews from Valdas Adamkus when he was president of Lietuva.  One of the persons that was saved was Ada Galinaitis.  I would like to talk to the family..."  If anyone has any information, please contact us and we will pass it on.  Thank you.

"Our family - my parents and us four children -fled Lithuania in July of 1944, and we lived, sometimes briefly, in many places: Petrowitz, Breslau, Landshut and Weixerau during the war and then in Munich, Stuttgart, Fellbach, Schwaebisch Gmuend, Pforzheim, Heilbronn, Traunstein, Ludwigsburg.  We emigrated to the US in December of 1952."

"My parents were DPs and came over in 1952 on a military ship that docked in New Orleans.  I'm very interested in hearing stories of others and would love to share more of my parents' journey."

"My great grandfather's sister was On a Kamarauskaite Kevalaitiene and her husband was Jonas Kevalaitis.  Their children were Sigitas, Modestas, Zika, Julius and Liudute.  They lived in Kaunas prior to being sent to the DP camp.

Jonas was shot by the Germans in front of his wife and children in front of their home.  On a and some of the children were sent to a displaced persons camp in Siberia, Russia.  Modestas was later sponsored by my great grandfather and came to the US in 1950 from the camp.  Sigitas immigrated to Australia in 1948.  Zika married Algirdis Visockis and immigrated to US in 1949.  I don't know what happened to Julius or Liudute.  If anyone has information on the family, please contact me through Facebook.  Thank you!"